Breweries of the NH Lakes Region – Part 1 of 2 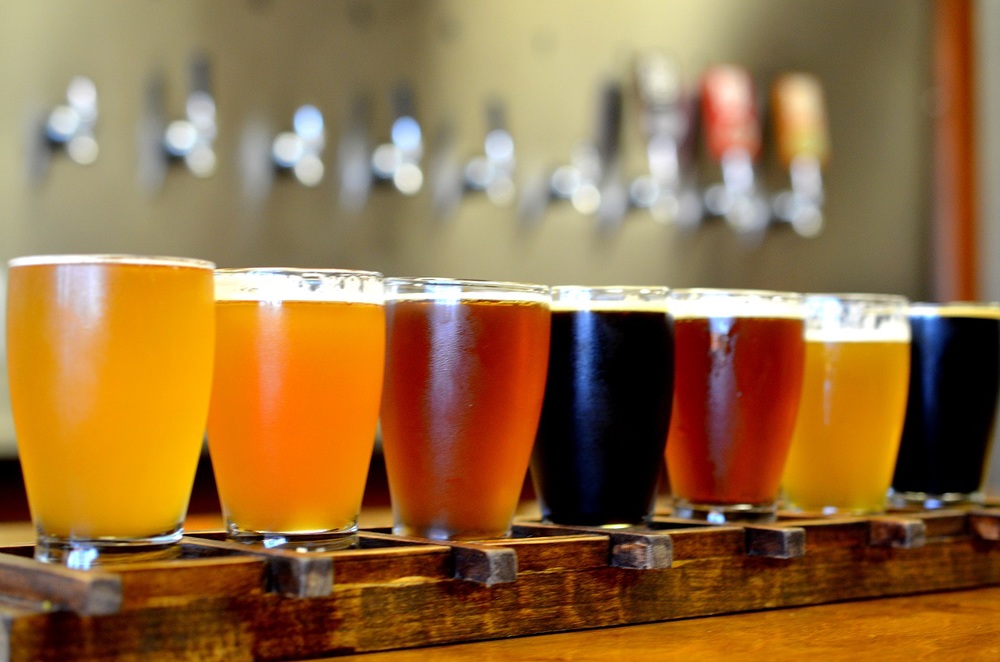 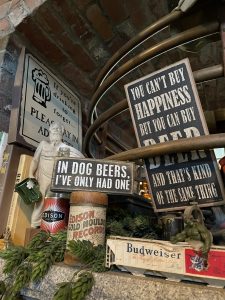 Micro Breweries have become a huge industry in the US. We are also seeing this explosion in the Lakes Region of New Hampshire. Everything from IPA’s to milk stouts and porters and everything in-between. Kevin and I have decided to do a tour of breweries around the Lakes Region and give you our opinions of various microbreweries. We realize this is quite an undertaking, however, someone has to do it and we are up for the challenge. We can’t promise we will hit every brewery out there. We will make the promise that if we forget any breweries and you notify us, we will visit and report back.

We certainly are not experts. We are simply folks who love craft beer and love trying new places out. So, as you read our assessment of all of the different breweries, please keep in mind, it is only our opinions. We would love to hear from you and get all of your opinions. So, contact us. 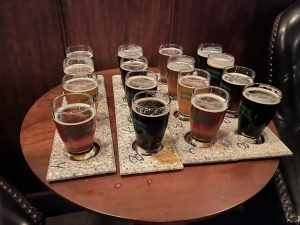 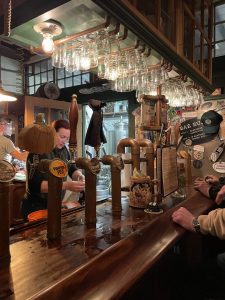 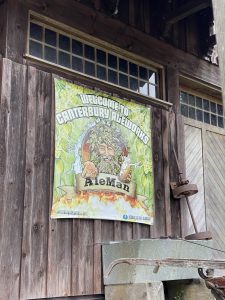 Canterbury AleWorks is a bit out of the way. It is on a one-lane dirt road that winds and twists and, at the moment you feel like you are definitely going the wrong way, there it is. Canterbury AleWorks is water-powered and wood-fired. Steve Allman opened the British-inspired brewery in the summer of 2012. You are sure to see Steve there since he is also the brewer, bartender, and head bottle washer. The tasting room has limited seating however there is outdoor seating also. Bring your dog and bring cheese and crackers or whatever else you would like to snack on because they do not have food. However, just down the road, a piece is the Fox Country Smoke House where you can pick up smoked cheeses and meats to bring over to the brewery. The tasting room has 8 beers on tap, ranging from their signature beer, Canterbury Ale to Granite Ledge Stout which is a smooth dark beer made with oats & coffee and complements of espresso. A favorite of mine is “Weiss cracker”. Steve serves this brew from spring through August. It has Jalapeno pepper overtones and also a bit of heat. The flavor is outstanding.   Go on over and try them out, you won’t be disappointed. 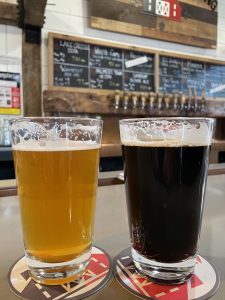 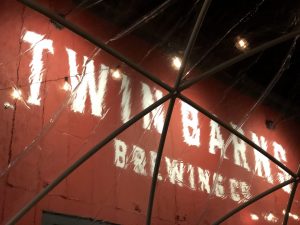 Twin Barns Brewing opened its doors in June of 2018 after many months of renovating the 1850 barn. While renovating the co-founders, Dave Picarillo and Bruce Walton discovered that the barn was actually two barns joined together.  Thus, the name Twin Barns Brewing Company was born. The inside is a large space with a bar and picnic-style tables throughout. Outside is the Biergarten complete with another bar, tables, games, and a food truck. You can order food inside or from the food truck. Best burgers in town! Their idea was to brew and serve proper handcrafted beer in the Lakes Region. Their flagship beer is Palmers Town followed by Lake Cruiser and Sandbar. My favorite is Sandbar which is a smooth rather light beer. Kevin prefers Lake Cruiser which is an IPA. Twin Barns have a couple of fall beers coming up. The Cranberry Rosemary Gose, which is a sour and also a Gose. They also have Twin Beans which is a blond ale with coffee. Twin Beans is a rich smooth ale with compliments of coffee. It is goooood! Don’t forget the food at Twin Barns, besides having the best burgers around, they gave great Buffalo Chicken Dip, Pretzels, and homemade hummus. The pastrami sandwich is also a favorite. Twin Barns is one of our go-to places to hang out meet people and drink great beer. 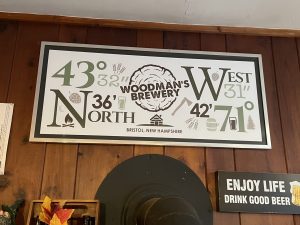 Woodman’s Brewery is a small family-owned & operated brewery. They strive to provide great beers and a friendly environment for everyone. Woodman’s has seating inside at the beautiful living wood bar and plenty of seating on their new porch. Additionally, the outside is filled with tables and picnic tables. It is a great friendly atmosphere. We chose to sit inside at the bar so we could see all the beers. They have 5 beers on tap, one of which is usually a seasonal or specialty. I have to say, I was a bit disappointed when we were served our brews in plastic. I would have liked glass with their logo on it. That just kind of makes it more special. I had the Oishii Pilsner which was very good, however, a bit hoppy. The other beer I tried was Woody’s Maple Cream which came highly recommended by people I met along the way. The Maple Cream rings in at 8.2%.  However, it really goes down smooth with a great taste and not too much hoppy’ ness. If you like hop-forward beers, Woodman’s Brewery is the place for you. 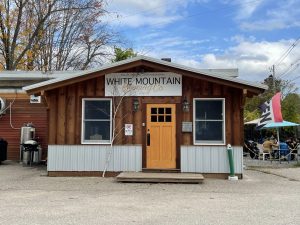 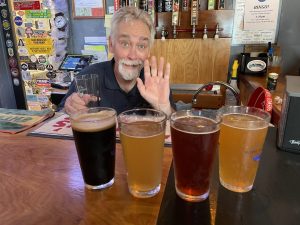 White Mt. Brewery is a hidden gem located near the center of Ashland. Founded in 2015 by Dave Page, he is owner, operator, and brewmaster. Dave has been brewing beer for over 35 years and when asked why he got into the brewery business, he stated, “I needed a retirement plan.” Well, that he did, he began with a 1.5 barrel system and now has grown to a 5 barrel system, using the 1.5 for specialty brews. White Mt Brewery was recently added to the New Hampshire Beer Trail. Dave is a finish carpenter by trade and has been improving his establishment each year, he plans to enlarge the bar this winter. As soon as you enter, you are at home and making new friends. As for the beer, I love it all! As Dave explained to me, he brews beer the way he likes it and hopes others do also. Everyone certainly seems to totally enjoy it. Dave doesn’t over hop his beers which results in a smooth, easy-drinking beer with no bitterness. My favorite of the day was the Hippy-Hoppy-Hoop which is a Canadian Lager. It is smooth, refreshing, and crisp. Next up was Red Neck Ale, just as smooth and so much flavor. I give them both 5 stars! Beer 30 is their flagship brew. I will have to try it on my next trip there. Dave’s explanation of how he named it, “it’s beer:30 PM someplace!” The names of the brews are as interesting as the beers: Old Duffa, Loon’s Eye, Leaf Peepa, Cryen’ Jenny, and What Corka !. I highly recommend you take a trip to see Dave at White Mountain Brewery, you will not be disappointed and you will probably make some new friends while there.