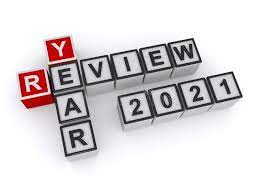 2021 has been anything but boring. It came in with a bang and it will go out with a bang!

January 8 was the final episode of “Jeopardy” hosted by the late Alex Trek. This ended a 37 season era.

Rounding out January was the surpassing of over 100 million Covid-19 cases.

The beginning of February (7th) was the Super Bowl. We may not have had the Patriots to cheer for, however, we did have Tom Brady leading his new team, Tampa Bay Buccaneers to a victory and Brady’s 7th Lombardi Trophy.

Mid-February brought a devastating winter storm to Texas which paralyzed the state with power outages and record low temps. Texas may know how to do heat, however, freezing temps and ice storms are foreign to them. Later in the year came the Kentucky tornadoes which devastated the area, killing over 70 people. While the Northwest had a heatwave that temps soared 100 degrees and above. Hurricane Ida batters Louisiana with over 150 mph winds and torrential rain for more than nine hours.

As the death toll from Covid rose to over 500,000 in the US, February 27th saw the US authorize the third Covid-19 vaccine, a single dose shot from Johnson & Johnson.

With March came another round of stimulus checks mailed too many Americans. March also was quite a violent month across the country, with mass murders in Georgia and Colorado.

Remember George Floyd from last year? The trial against former Minnesota police officer, Derek Chauvin, began. He was charged with the killing of George Floyd. He was found guilty in April.

While Covid was/is dominating our lives, many people wanting to escape the cities, we have seen the price of homes skyrocket. Homes would hit the market and bring a dozen or more offers on the first day. Many offers were over asking. It was like a feeding frenzy. This trend continued through the summer.

The US has been experiencing a shortage of employees across the country. Hiring signs are everywhere. Where did all the people go? There are a number of reasons that may factor into this phenomenon. Many baby boomers decided to retire early when the pandemic hit. Employees in the restaurant industry along with other service industries changed fields. Others went back to school, and a large group decided to work for themselves from home and started their own cottage business.

This past summer brought the wettest July to New Hampshire in years. To make things worse, it always seemed to rain on the weekend. This made for a bad boating season in the Lakes Region. No drought this year and our lawns looked great all summer.

Restaurants throughout the country devised outdoor seating because of the pandemic and the indoor restrictions imposed by states.

Throughout the summer the numbers of Covid infected have been decreasing. Contributing factors are more and more people have been receiving their vaccinations and we are outside more. Also through the summer school districts across the country were in turmoil as to how to handle the start of the new school year. Masks vs. no masks, remote vs. in-person learning vs. hybrid. School board meetings in New Hampshire became battlegrounds. Everyone was angry, there was no consensus. It was extremely political. However, the 2021-2022 school year began and for the most part, the kids were happy to be back in the classroom. Maybe not the classroom, but happy to be back with their friends.

In August the US withdrew all American troops from Afghanistan, 11 days later the Afghan government fell to the Taliban, leaving thousands of Afghans stranded and in fear of their lives because they had aided US troops for years. Not a good look for the US.

August a new strain of Covid, the Delta variant has become widespread throughout the country. November brought yet another new strain called Omicron which is now the predominant strain of Covid in the US. When is it going to end? With the weather getting colder more and more people are inside which is leading to more infections. We are all “masking up” again.

The summer also brought the Olympics which was postponed from last year. The games went on however, there were no spectators.

The major news event throughout the year has been Covid. It has affected almost every individual in some way or another and has changed our way of life.

Pop Culture gave us breakups, marriages, new couples, and of course new music:
* Taylor Swift re-released a 10-minute version of “All Too Well” which brought on the chant ‘Give the scarf back’
* Adele is back with a new album, “30”
*JLo and ARod call it quits, and about a minute later she is back with Ben Affleck.
* We can’t leave out the breaking news of Kim Kardashian filing for divorce from Kanye West.
* Brittany Spears was finally released from her conservatorship and is no longer controlled by her father, she can make her own decisions.
* The Real Housewives of ______(fill in the blank) was continually in a state of turmoil.
* Gwen Stefani and Blake Shelton were married.
* Paris Hilton was married at a Marriott. Do you think her family was a bit miffed about that?
* It seemed everyone was binge-watching “Bridgeton” reaching over 82 million households.

Then there are the heroes and activists of 2021. At the top of the list are our first responders. They put themselves out there every day to protect and keep us safe. Thank you. Amanda Gorman, stole the show at the Inauguration with her inspiring poem “The Hill We Climb”. Simone Biles, Aly Raisman, and other gymnasts testify against Larry Nassar abuse.

The race to space by a few of the world’s richest men dominated the latter part of the year.

Looking forward to 2022 and what it will bring for us. Happy New Year.