New Hampshire has a brand new nonprofit organization. It is called 603 United and it focuses on adults 18+ with and without an intellectual disability. “Live United & Be Inclusive” is their motto, says Cassie Contigiani, the Executive Director. Cassie has been there from the inception.

603 United is the brainchild of Kevin Shaw. Kevin used to referee high school sports, one day after a basketball game, he noticed another game was beginning. The stands were filling up with spectators. As a matter of fact, there were more spectators there than at the high school game. Curious, he began asking questions as to what was going on. It was a Unified Sports game, he was told. Unified Sports is a high school program that is designed to include intellectually challenged individuals with regular education sports programs. Kevin was hooked. About two years ago when Kevin was talking with the mom of one of the Unified Athletes at graduation. She said, “This is the saddest day for these kids, after today, they lose their support and social group.”

Fast forward to this year. What if there was a program that these young adults had where there were activities and sports? Provide a welcoming accepting social environment where they could get together with their friends, and participate in activities and sports. Kevin knew Cassie and knew she was working in a similar program in Maine. He approached her with this idea and asked if she would be interested. 603 United was born!

603 United officially began on June 1, 2022, with a bang. Membership took off and they have over 20 members and 35 volunteers. Don’t let that number fool you, they can always use more volunteers because membership is growing every day. 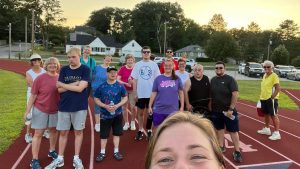 If you are looking for a great new local program to support, 603 United is a fantastic organization. Check out their website, www.603united.org for all of the events coming up and ways to help out. The next big event is the Cornhole Tournament on September 24, 2022, at Akwa Marina Yacht Club. There will be cash prizes, raffles, music, food, and a cash bar! 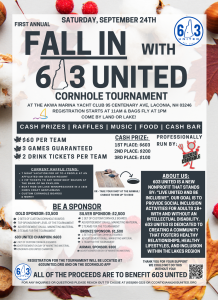